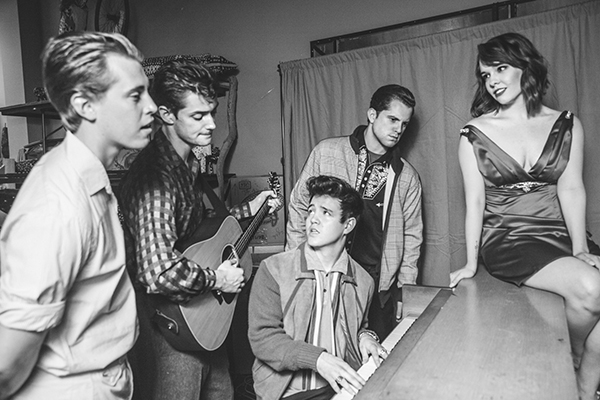 In December 1956, Johnny Cash, Jerry Lee Lewis, Elvis Presley and Carl Perkins met at the recording studios of Sun Records in Memphis, Tennessee. And Million Dollar Quartet, at the Noël Coward Theatre, charts this memorable get-together with 100 minutes of rock’n’roll played and sung by a group of four – plus a few extras.

Bill Ward, as Sam Phillips of Sun Records, keeps the narrative going between songs, and there’s much bantering and wise-cracking among the young stars as they vie with each other for the microphone. But the whole show’s really just an excuse to blast out old favourites such as ‘Folsom Prison Blues’, ‘Down by the Riverside’, ‘Great Balls of Fire’ and ‘Memories Are Made of This’.

Ben Goddard as Jerry Lee Lewis is terrific, if not manic, as he bangs out songs on the piano; Michael Malarkey has a fine voice as Elvis; Derek Hagen (Johnny Cash) has a wonderfully gravelly tone, and is particularly good in ‘Walk the Line’; and Carl Perkins – well, to be honest, I don’t know if Robert Britton Lyons is like him, but he sure can sing (it was Perkins who had the original ‘Blue Suede Shoes’ hit before Elvis ‘stole’ it from him).

Any middle-aged rocker will love the energy and sheer fun of the evening – and this one’s twenty-something nephew thought it ‘awesome’, too.